The Knot Reports a Resurgence in Time-Honored Traditions, Such as Getting Down on Bended Knee

Time-honored marriage proposal traditions are back in vogue, according to The Knot's "2017 Jewelry & Engagement Study." When it comes to getting down on bended knee, using the phrase "Will you marry me" and asking her parents for permission, everything old is new again. 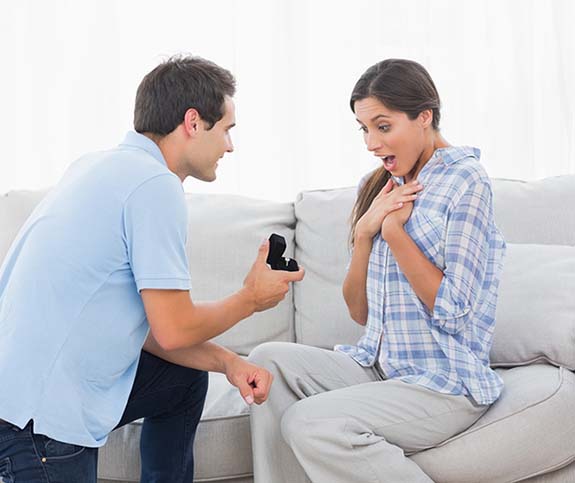 For instance, exactly 87% of future grooms told The Knot that they proposed on bended knee. That number is up 10 percentage points since 2011. About 9 in 10 grooms claimed they popped the question with engagement ring in hand (up from 85% in 2011) and 91% actually asked for their future spouse's hand by using the phrase "Will you marry me?" (That's up from 86% in 2011). More than three in four (78%) asked their partner's family for permission before proposing.

Forty percent of grooms noted that their marriage proposal was "meticulously planned, down to the last detail" — a process that took, on average, 4.4 months. Meanwhile, a declining number of brides report being surprised (35%) by the proposal.

"We're seeing proposers put more time, thought and effort into creating the perfect proposal, as well as an engagement ring they know their partner will love," said Kristen Maxwell Cooper, editor in chief of The Knot.

The Knot also reported that 1 in 3 couples shopped for their engagement ring together and that the time spent looking for the perfect ring was 3.5 months, up from 3.3 months in 2011. Only 6% of brides wished they could have been more involved in the purchasing process.

A large proportion (45%) of proposals are now taking place in a public location, such as a scenic spot, garden, park or zoo. That number is up from 34% in 2011. Nearly half of all couples (47%) are enlisting a photographer or videographer to capture the exact moment of the proposal. Despite the deep thought and rigorous planning, 60% of proposers still reported feeling nervous before asking for their significant other's hand in marriage. That number is up six percentage points vs. 2011.

Here are more important stats from The Knot's survey.

The Knot's 2017 Jewelry & Engagement Study is based on a survey of more than 14,000 engaged or recently married brides and grooms.