“The Indian Blue,” a 7.55-carat fancy deep grayish-blue diamond, will be the top lot at Sotheby’s Magnificent Jewels sale in New York City on December 10. 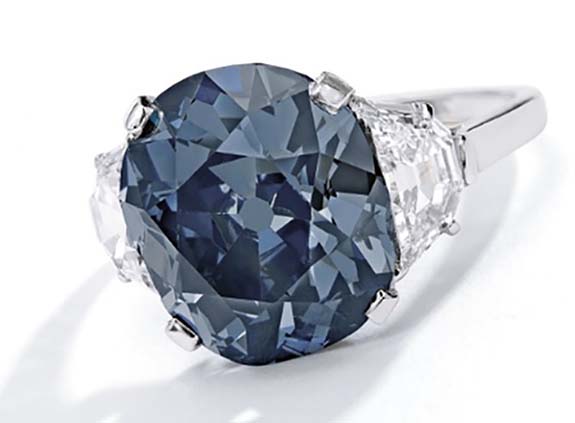 Described as the “property of a distinguished lady,” the cushion-cut center stone has a SI2 clarity and is flanked by two shield-shaped diamonds in a ring that carries a pre-sale estimate of $6 million to $8 million.

Trace amounts of the chemical element boron are responsible for causing the coloration of natural blue diamonds. According to the Museum of Natural History, “less than one boron atom per million carbon atoms is sufficient to produce the blue coloration.” 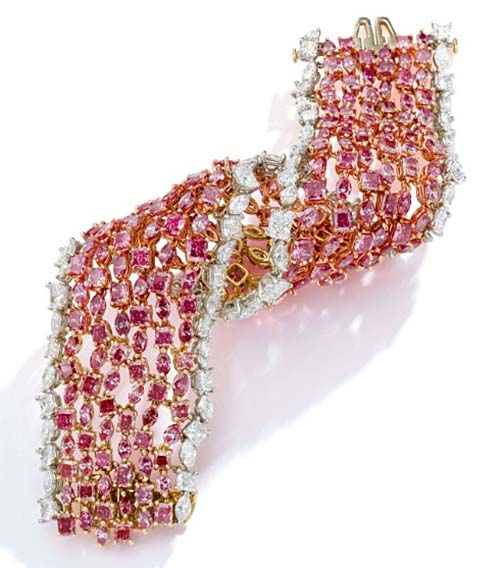 Another highlight of the New York auction is “The Majestic Pink,” a highly flexible bracelet comprised of 204 radiant and marquise-shaped diamonds of various fancy pink and red hues bordered by similar-cut, near-colorless diamonds. The total weight of the colored diamonds, which range in size from 0.10 carats to 0.47 carats, is 43.34 carats. The bracelet bears the maker’s mark, Carvin French, and is expected to sell for about $3 million.

Also scheduled to hit the auction block at Sotheby’s on December 10 is a ring featuring an ultra-rare 1.38-carat fancy red diamond. Fancy reds so rare that a typical Argyle Pink Diamonds Tender releases only four, or so, per year. Rio Tinto’s Argyle Mine in Western Australia — the primary source of red and pink diamonds — is scheduled to cease operations in 2020, so supplies of these beautiful stones are expected to become even more scarce.

The cushion-cut red diamond is framed by round pink-hued diamonds and square-cut colorless diamonds. The estimated selling price is $1.8 million to $2.8 million. 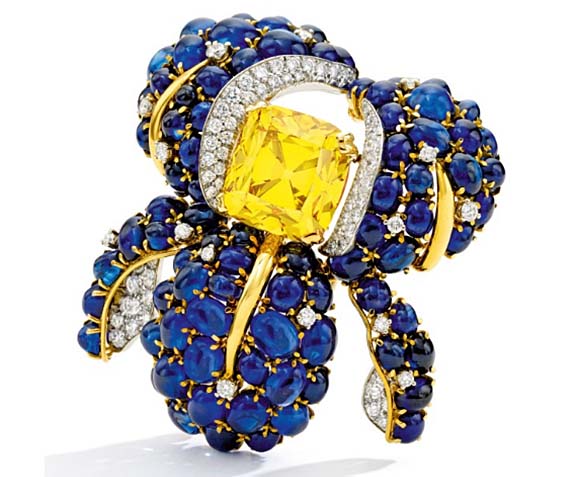 Highlighted by a 14.37-carat fancy vivid yellow diamond, this brooch by Verdura is expected to fetch $1.6 million to $2.4 million. Resembling a delicate iris, the brooch is centered by the round-cornered, square-cut yellow center stone and accented with petals formed by cabochon sapphires and round colorless diamonds.